What I Said About You 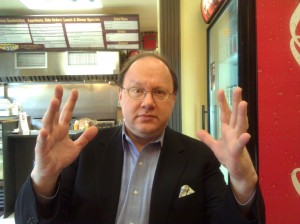 “The world of now is not the world we came into.” (Copyright 2011 LSMFT). These are the profound words Loren Schoenberg spoke to me (and promptly copyrighted) at our recent lunch in Seattle during which we meditated on our early days as musicians in New York. Loren and I were band mates at a regular gig in New York in the 80s at the Red Blazer on West 46th where we played together every Wednesday for four or five years. We also had a sax quartet with Danny Bank and Jon Gordon in which we played the original New York Sax Quartet book. Loren, in addition to being a great tenor player and band leader, has gone on to become the Executive Director of the Jazz Museum in Harlem, an organization that features many outstanding jazz performers in various concert and educational settings.

Organizations like JMIH are an essential part of the “avoiding extinction” story because they are a key link between jazz masters and students learning jazz, a tradition which would become diluted without firsthand interaction between the present and next generations. They are also a platforms for music and performers that otherwise would not be heard in the gig desert that we are experiencing now. Loren described a recent concert of music for three bass saxophones composed by the outstanding but moderately obscure reed instrumentalist, Scott Robinson. Thank you Loren for building this organization and doing your part to prevent jazz extinction.

Other topics of conversation: the late Danny Bank. Danny is one of those musicians everyone in the world has heard, but not heard of. His wikipedia entry doesn’t begin to do him justice. He is my one-degree-of-separation link to every musician in my record collection. My favorite recordings (and films) of him are with Miles and the Gil Evans Orchestra. Anyway, Danny passed in June 2010. I asked Loren the whereabouts of the original New York Sax Quartet book and their vinyl recording which displayed their amazing mastery of the idiom. Whereabouts unknown. Thank you Danny for all your amazing work.